Pinning Down the Troika! Cosmology

Troika! is a fantastic system, possessing a unique spot in the pantheon of rules light RPGs with old school temperament.  The core rulebook hints at a setting, centered around the sci-fantasy city of Troika, which attracts a wide array of bizarre interstellar travelers.  Troika! uses what the kids are calling ‘implied world building’; there's no gazetteer, no manual of locations, no setting bible.  You can infer whatever you please from the character backgrounds, monsters, and spells as presented. I dig it; this universe is ours to shape as it unfolds.  There are, however, a couple of things about Troika! that get my goat.  The overview of the setting itself blows whistles that many an AD&D 2E survivor will hear.
"Players travel by eldritch portal and non-Euclidean labyrinth and golden-sailed barge between the uncountable crystal spheres strung delicately across the hump-backed sky."  I hear "crystal spheres" and Spelljammer's abstruse abuse of astrophysics springs quickly to mind.  That means things like magical space propulsion, hilarious concepts of gravity, envelopes of oxygen and so much more.  Unless we're fighting titanic space battles in schooners and frigates, though, I can handwave most of that business.  But if travel is a central part of a Troika! campaign I can't let crystal spheres lie.
So what am I doing here?  What's my deal?  I need to sort out my concept of space travel in Troika!.  I need to separate my understanding from undead memories of Spelljammer and hone in on what flying the hump-backed sky really means for me and my players.  Let's talk crystal spheres.
In Spelljammer (and the AD&D 2e endgame cosmology) a crystal sphere encompasses a setting.  In simple terms, Dragonlance and the Forgotten Realms and Greyhawk exist in different spheres.  A crystal sphere, however, contains that entire setting's solar system.  Spelljammer calls that interior of a sphere "wild space".
Outside of the spheres is "phlogiston", which is described as "a turbulent, unstable, multi-colored gas (or gaslike medium) which fills the regions between crystal spheres."  So if one would like to travel from Toril to Krynn, say, they'd have to:
I'm not particularly interested in playing through the crossing of vast spaces, and even less interested in detailing full settings or planets for the places the characters will visit.  All of the "spheres" depicted in Melsonia's published books, as well as those published by the community, are compact places; countries, regions, cities, and continents at most.  In other words, I don't want a sphere to encompass a setting with all its attendant detail. Too much work and too far from Troika's vibe. 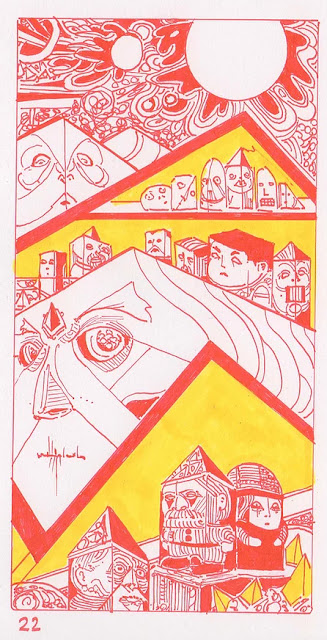 I'm going to consider a "sphere" to be a conceptual wrapper around some place of interest in the multiverse.  I'm also going to discard phlogiston as a concept.  What we're left with is the idea that out in space there are crystal spheres that contain other places.  To find them you'd need to traverse you own sphere, travel through plain old space, and find another sphere.  Troika! suggests there are millions.
I keep using the word "traverse" when I talk about spheres, and that's because crossing the boundary of a sphere in Spelljammer is a big 'ol deal.  "The spheres consist of an unbreakable, dark ceramic material of unknown origin." So how does one fly a space craft through?  That's achieved via teleportation, a phase door spell, riding a space dragon, or utilizing one of the gigantic portals that appear naturally and at random in the shell and hoping it doesn't open into a star.  If the shell of the sphere is of a galactic scale, finding one is pretty improbable.
None of that sounds like fun, so I'm going to discard it from my memory and my own Troika cosmology.  So how does a golden barge cross the boundary of a sphere?  With ease, I say.  Not gonna worry about it. You just pop on through into whatever atmosphere is appropriate for that sphere. Can you see into a sphere?  Sure; we don't need the spheres to be gigantic, pitch-black porcelain pods. Troika! suggests that they emit their own light, and that's fine with me.
My conscience is now clean on crystal spheres.  On to thinking about the logistics of propulsion, oxygen, gravity, and whatever other pieces of nonsensical non-science Spelljammer implanted in my soul.  Or maybe I'll start obsessing over the nature of portals in Planescape and how they might function in Troika!. What else?  Golden barges, that's what.  Where did that idea come from?  Certainly not from Michael Moorcock's first and worst novel where the golden barge is [spoilers] never even reached? [/spoilers] Windmills await tilting.
Labels: Melsonia Planescape Spelljammer Troika!