I’ve never seen the allure of dungeon delves.  Apart from the fellowship’s brief and epic romp through Moria, crawling through dungeons wasn’t a thing in the sword & sorcery of my youth. By the time role playing entered into my young consciousness, its concept was informed by the Dragonlance novels, the swashbuckling absurdity of Fafhrd & the Gray Mouser, and the morose transdimensional wanderings of Elric of Melniboné.

I never bothered with dungeons, in the Gygaxian sense, in my formative role playing days.  Of course, my early roleplaying days were bereft of Dungeons & Dragons itself thanks to the satanic panic.  Middle Earth Role Playing and Rolemaster were, to my mind, tools to explore ancient, abandoned kingdoms and the tractless, monster infested, and unpopulated lands in between.  No one in those worlds built massive, deadly puzzle dungeons for characters to explore because, well, that’s far fetched even for fantasy.

Why is this on my mind? At this very moment I’m working to incorporate pieces of the infamous and well regarded Rappan Athuk into my Midgard D&D 5E campaign.  The characters are trying to use ancient dwarven tunnels to avoid overland travel through the deadly jungles of Kush, and this seems like a great spot to throw in some delving, right?

Rappan Athuk is a brilliant, lively, and MASSIVE dungeon published by Frog God Games.  Its history in the game is long and storied.  The D&D 5E version of the book is fantastic, brimming with outlandish ideas.  Most alluring is its plethora of (digitally available) maps that make it easy to drop into any game world in bits and pieces.  Pick a level, pick a map, drop it on your tabletop and go, right?  Wrong. 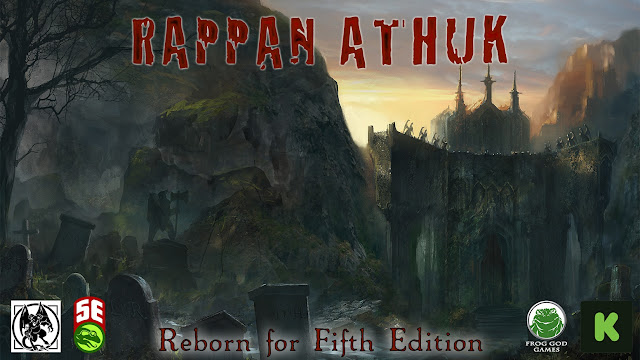 For some reason the presentation of the dungeons, the numbered locations, and the descriptions are impenetrable to me.  I’ve been staring at the description of "The Tunnels of Terror, level 0E3, the Ruined Chapel of Orcus" for two weeks now and made no progress.  For all its keen and creative ideas, I just can’t read through this massive block of words.  There’s history here that the players will never know, never hear, and which has little bearing on the action.  There’s no boxed text or bullet points to parse and read out loud.  I’m reminded repeatedly why I dislike dungeon delves; where’s the story?

When I look at the map I see what I dread most in dungeon delves; long tunnels of unbroken monotony that the characters will stumble through, slowly and warily, until they hit the action.  Maybe I’ve learned too much from Mike Shea and his concept of Fantastic Locations.  I’m at my worst as a dungeon master when there are blank tunnels to traverse.

Let’s step into another world and another system, now.  I decided, in my Numenera campaign, to finally try out the “Numenera Ruin Mapping Engine” from Jade Colossus: Ruins of the Prior Worlds.  First, let it be known that I consider the cypher system to be the easiest of systems I run in terms of session prep.  It’s just smooth as butter and that’s a story for another day.  But here I am setting out to randomly generate a ruin (dungeon), on the fly, in the middle of a session.  Crazy, right?

Nope, it’s fucking sublime.  Monte Cook and co. are, in my humble opinion, the visionaries of our age, capable of a pulling infinite ideas from the aether.  Pure, insane, beautiful ideas.  In this book, Bruce R. Cordell has created a dice-driven mechanism for generating a dungeon on the fly, replete with huge tables of ideas to roll against and throw at your party.  Since the cypher system puts all dice rolls in the hands of the players, I’m letting THEM roll the dice to generate the dungeon. 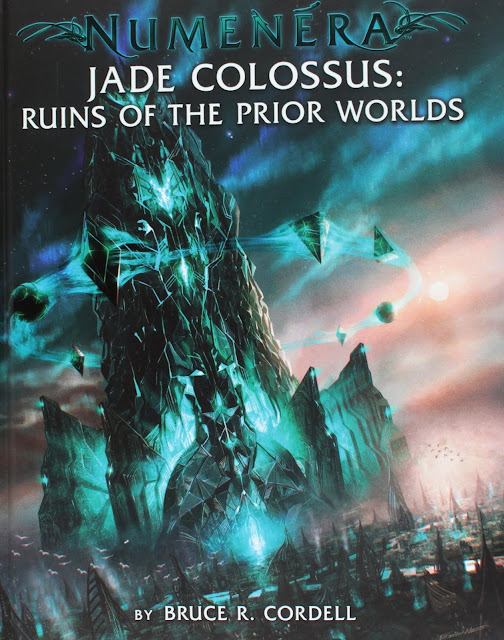 I gave the party a huge, blank map in Roll20, an initial corridor, and off we went.  They mapped the route and all the possible directions of exploration, and I dropped dungeon dressing and monsters on them as we let chaos be our guide.  It has been, so far, one of the most fun role playing experiences in my recent memory.

Maybe I don’t hate dungeon delves?  Nah, this is something else entirely, and it's easy to incorporate aspects of the story as we go, throwing in canned ideas and encounters without the players even realized what I’m doing.  Maybe, as I’ve mentioned, it’s because the cypher system is so easy to prep?  Is it because Monte Cook is guiding me with astral mind bullets?  Most likely, it’s because the Ninth World actually has a reason for the existence of ancient, impenetrable ruins; it’s part of the setting. Such are the possibilities when we walk away from traditional sword & sorcery role playing tropes.
Labels: D&D 5E Frog God Games Monte Cook Games Numenera Rappan Athuk