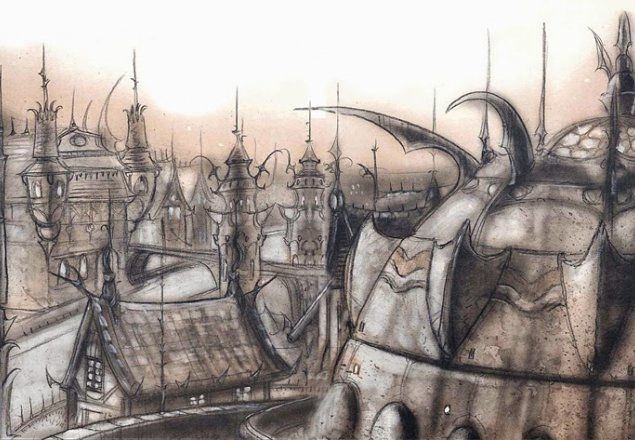 
When Eagungad the Orc walks out to the streets of Sigil, he never knows what he’ll encounter. Nausea and dizziness were chief candidates should he choose to look upwards in the logically indescribable city of doors. Sigil is a city built into the inverse side of a floating, hollow ring, far beyond the realms where that would be impossible. Eagungad, then, is a Planewalker, and like any good Planewalker he is partial owner of a townhome here. An awkward, cramped, and oddly smelling townhome.

Eagungad had it. He needed a break. The House stunk like rotten food from somewhere, the floors were sticky, and yet another debate over Auril’s infallibility had erupted. Quickly he slipped out, telling only his goblin board-mate Cheez he needed something from the Grocer.

Eagungad looked up from his anxious stupor, only to see, and much to his dismay, a crowd had formed in front of his destination. Some form of street preacher or lunatic barked odd slogans at them. Taking a closed posture, he began muscling into the horde, and putting aside his social morae he barreled in. A few dirty looks and pushing-asides later, he found that this effort was for naught; the herd only pushed back.

He heaved a hearty sigh. Perhaps, he mused, I could just forget those groceries; they weren’t the reason I left anyhow. But as he turned his back, he heard something truly odd from the street lunatic that drew the crowd... “Eagungad!” came a coarse woman’s voice.

“Huh? What?” was Eagungad’s off-hand response, coming serendipitously at a lull in the crowds murmurings. The crowd parted as they turned to the unawares Orc. Through the group Eagungad could discern those that were the herd’s focus: Two other orcs, much to his awe, were in the middle of the street, encircled by the audience.

One was a bruised young boy, pallid but strong and brawny. The other a lovely Orc woman, perhaps just into her maiden years, and she laid in the street near a huge, wooden trumpet-like instrument.
And then, as though to confirm that indeed she called his name, she took on an expression as though to vomit, and she screamed at the top of her lungs “Ea-gun-gad!!!”

Eagungad was stunned. The two strange orcs were also stunned. A light of understanding dawned in the woman; Eagungad was not jabber spoken in a fit, but in fact was our Planewalker’s name!
The crowd started to disperse, and the boy picked up the woman and started for Eagungad. Both of them in unison shook their heads, and again in unison asked the other “Who are you?!”
“You know who I am! You said my name not two seconds ago!” Eagungad rasped with a hand to his temple, exasperated.

“Large one,” said the woman, who had returned from retrieving her instrument “I knew not I spoke of your name. Those jabbering’s and stranger things still come often with my visions.” Eagungad was taken aback by her vocabulary and stodgy, blocky manner. She didn’t even have an accent.

Cutting to the root of the issue, Eagungad sighed and said “Alright, then, I’m Eagungad. Now, who are you and how’d you ‘speak’ my name without knowing it?”

“I am Bez-Lor, Prophet of Luthic, foreteller of dooms.” she said, stilted in manner. the words had no meaning to Eagungad, who simply stammered suddenly “You’re an Orc, aren’t you?!” Bez-Lor giggled, not unlike a young girl might.

“See, where I’m from,” Eagungad justified “there’s not many of us left.” Bez-Lor, her brother who was introduced as “Jonk”, and Eagungad began discussing this, and Eagungad’s many adventures. Eagungad told them many wonders and terrors of Midgard and was told in turn about the Underchurch. Bez-lor had essentially become an outcast, even among fellow Anarchists, when she began seeing her doom-full visions from Luthic, the Orcish Goddess of hearth. “With merely a touch I see the err of others ways and I babble unfettered. I am compelled to then speak of it. Oh, Come with us, Eagungad!” Bez-lor exclaimed “We will show you our Underchurch!”

The “Underchurch” Bez-lor and Jonk took him to was unimpressive. It was a small cellar kept comfortably dark (to orcs) of an abandoned restaurant that now serves as Bez-lor’s home and temple.

But to Eagungad, the revelation of this place was nothing short of miraculous. Tears in his eyes, Eagungad nearly choked as he realized that not everywhere is like Midgard. Indeed, the Orcish people have a place in the universe.

Jonk began setting a fire up in the furnace in the corner, and Bez-Lor had disappeared to produce food for a party of some sort. “What— Excuse me— What are you two doing?” Eagungad choked out. “Preparing for our Full Moon Gathering tonight.” Jonk said curtly. Bez-lor puzzled a bit at this question.

“Who do you worship that you have never partook of Gathering? Luthic and Gruumsh demand sacrifice and gatherings.” she asked.

Eagungad frowned. “See, my wife is priestess of the White Goddess—”

“Ah, Luthic is in some places called as such.” Bez-lor interrupted, before heading off to a makeshift kitchen area.

“OH! Well, okay, then...” Eagungad un-furrowed his worried brow. He felt relieved to not offend his new friends. But the problem of his lack of religious habits persisted. “...Uhm. I haven’t been to her gatherings for a small while now. She has been missing for a couple years.” With a face that lacked pity or scorn, Jonk matter-of-factly asked “Who took her? And why?”

Eagungad shook his head. “I don’t got the foggiest idea.”

Bez-lor passed by Eagungad, carefully carrying a steaming kettle of some form of bitter-smelling bean mash as he was discussing this, but to his shock her foot got caught on a loose plank on the floor, bringing her and the kettle to the ground! Eagungad snatched her arm before she could land in the scalding dish.

But she gasped, wide and continuously, despite being spared the burns. Eagungad set her to her feet and saw a look of utter horror about Jonk’s face. Bez-lor’s eye glazed over.

Color returned to Bez-lor’s face when she finished that moaning poem. Turning to the Planewalker, all she could say was “You have powerful foes. You must leave now.”

Eagungad then returned to his home, still distraught, but never spoke of why.