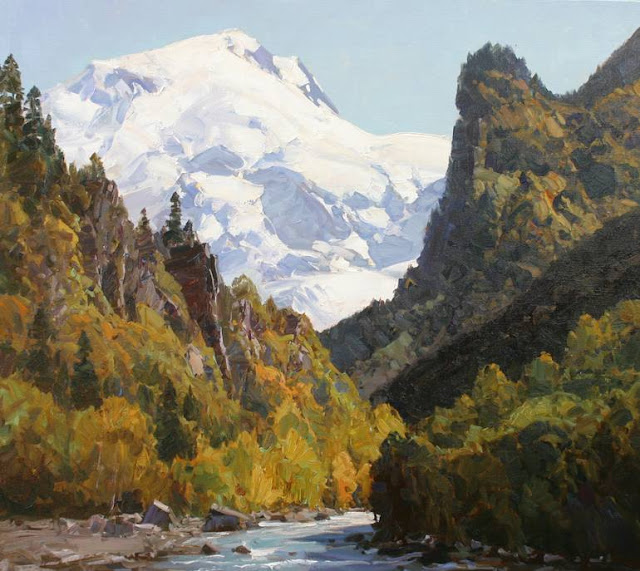 Rendworld, the world rent in twain, is my own fantasy setting. In “The World Rent in Twain” series I expound on this setting like a lunatic to all who will listen.

The Hachuswaylo is a mighty river, green with algae and wisdom. It flows from its birthplace, Tanuerah, all the way out of Duaidar, through the realm of the Mottahr, and into distant lands unheard of by the Angkean people.

This Great Green River forms when the Green River meets the Uerahn river, and the resulting delta is the site of the city of Tanuerah. Though both rivers are slow and shallow, one fed by rain and the other by spring, the Hachuswaylo combines the best attributes of both and is wide and fast moving.

Legends surround the Great Green River; some fringe cults say it is a goddess of the mountain in and of itself. Though rarely treated harshly, the Cult of the River is new and rather unpopular due to its narrow focus and demanding personal requirements. Regardless, the river is universally associated with birth and fertility. 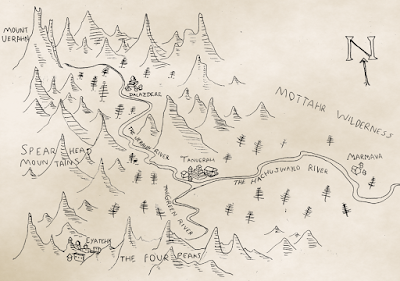 Tanuerah is an odd place; the city proper contains no craftsmen, merchants, or residents at all beyond soldiers and priests. It still observes a strict curfew, making it seem more of a military establishment then a city. The reason for this is safety: Tanuerah gets sacked and destroyed with relative frequency, as it is a major target for Mottahr and other enemies of the time.

Tanuerah’s ruined interior is populated solely by high-ranking priests and scores of the best and brightest warriors. Its other inhabitants include pilgrims making their way to see the original “Stairs.” This ziggurat, upon which sits a shrine to Duaid at the city's highest point, is the first in the style that all other Duaidar cities would adopt.

Other sites include a variety of artful forts and barracks, canals through which flow the city's three rivers, and the outer villages.

The first people of Marmava date back to the Tanueran empire of Duaid, though none of their lineages survive today. Marmava was once led by a regent named Marav the Terrible, who, it is said, was the single holdout in the city for believing Duaid ascended. Outraged that his people would blaspheme against the mountain gods when they erected a shrine to Duaid atop the city ziggurat, he summoned the northern Mottahr of Gruuk to slaughter every member of the village outside of his family and hunt any who escaped. Today none remain, or at least none who know or would admit to their heritage. Marav’s edict still stands to the Mottahr; killing Marmavans or contriving even worse fates are hailed as heroic deeds in Mottahr society.

Marmava has since been repopulated as a Duaidar frontier city by soldiers of Tanuerah, as a bulwark against the Mottahr. It has worked well; Marmava always gets attacked first, and they then effectively warn the empire of what has happened, producing a crude but reliable early-warning system of Mottahr warpaths.

South of Tanuerah, flowing north, is a rain-fed river that flows down from the four peaks into the Hachuswaylo, providing the algae for which it is named. This, the Green River, known alternatively as the Lesser Green River, is an important trade route for the loyal people of Eyatehk.

The people of Eyatehk include humans and dwarves, being a city that once supported the keeping of Duergar slaves (who would later gain independence as the Dwarves). The city is also home to a number of lesser races; its placement makes it a major trade hub.

The Four Peaks and the Spearhead Mountains both converge on the city. Eyatehk is built directly on the Thistle’d Pass, a bramble infested valley that is the one and only passage wide enough for armies to cross south of the Green Valley of the Hachuswaylo.

The architecture becomes more decadent the farther up the mountains you travel within the city. The area also becomes more sparsely populated. This causes the city to seem much more like a cliffside palace than a valley town. In truth, the older valley-city is much more militaristic in design, crudely decorated and simple compared to the myriad colors of the upper town. This is believed to be a holdover from old times and older wars.


Dalazdere, the Shell of a Palace

In ancient times, Dalazdere was a prosperous trading town with a strong army and crops envied the world over. They could grow the fabled Bluecap mushroom, considered the food of kings. Dalazdere acquired power and money through this crop. Extremely fragile in nature, the Bluecap couldn’t be grown anywhere else; it is exclusive to the cool mountain air and waters of the Uerahn River. That is, of course, until a landslide occurred, and over the next generation the Uerahn shifted course and no longer intersected with the highlands, falling into the much warmer lowland of the valley. Dams, levies and many other earthworks were built furiously, but to no avail. Dalazderites would leave to form a new city with a new trade by the time Duaid came to prominence, and never again did they possess the glory they once commanded.

You can read further about the world rent in twain in my next post on the Valleys of Spears and Arrows!