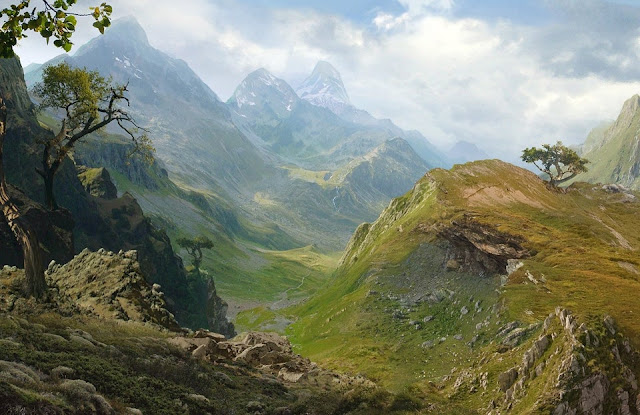 This beautiful artwork is titled "Rolling Mountains", by Daniel Romanovsky.

Rendworld, the world rent in twain, is my own fantasy setting. I've started it for a variety of purposes. Included in these is the simple desire to world-build, and thus we have “The World Rent in Twain” series, where I expound on this setting like a lunatic for all who will listen.

Eight-hundred years ago, human civilization first migrated south on a great pilgrimage, its purpose, beginning, and destination forgotten to time. On their journey, they encountered a mountain so incredibly vast and tall that it could touch the feet of the gods themselves. Called Angk-Yiiga, the Mountain of Heavens, they would settle in fertile valleys surrounding this blessed natural monument. This place, bordered on the east by the great mountain itself, would become known as Angkea. Though many continued on their journey and took to the seas, some would remain among Angkea’s beautiful peaks.


The Duaidar - People of the God-King

After roughly three or four hundred years, the city-state Tanuerah came to prominence out of this region, under a brilliant and noble king named Duaid. The Tanuerans were a proud mason-people, who excelled at creating bricks and moving earth. Their city stands today not any less tall than in the ancient time it was built.

Duaid conquered an empire that stretched as far north as Mount Uerahn and the spring that still feeds the Uerahn river, all the way south to the Four Peaks. The cities of Eyatehk would be built as a bulwark against Duaid; but no one remembers this, substituting the fiction that Eyatehk has always been a merchant village friendly to the King-Hero. In addition, Duaid controlled lands as far east as the Great Green River Hachuswaylo would run, though today most of this has been lost to opposing forces.

Nevertheless, Duaid was able to conquer the men of Shibar and Eyatehk after allying with the mighty warriors of Dedekle in the Valley of Spears, west, establishing the tradition of every city having a “Longspear” oversee its defenses and ramparts.

On and on the tales go of his conquests, alliances, and rise to absolute power. Even after his fortieth year, Duaid’s greatest feat had yet to come.

In Duaids forty-first year, the Tanueran kingdom was beset by hungering imps: hordes of the bestial monsters devoured every crop and all wild game. This plague of Imps was widely believed to be sent by the gods of the mountain themselves, so Duaid set off into the wilderness to appease them in discourse. But the King then never returned.

Inexplicably, the imps dispersed, the rain and wildlife returned, and the crops grew in such abundance that the people had food for the next three years. The elders declared it the Year of Ascendance; and it was followed by the Year of Revelation, where Duaid would appear in visions to all of his three sons and proclaim that he had tamed the gods of Angk-Yiiga and brought reason to their raw emotion.

And so, the Tanuerans become the Duaidar. In a tradition that lasts to this day, his three sons became the first priests of the new order and led the new triune empire.


The Mottahr - The Heathens and the Traitors

But Duaid’s revolution was not universally accepted. In the following years, the eastern people in the forests and on the fringe of the kingdom would split from the Tanuerans, Dedeklians, and Shibarites who accepted this. They rejected the message of Duaid as false, that the Beast-gods of the mountain could never be tamed, and they fought against the Triune Empire of the Duaidar.

Hated by their former brothers, they were driven into the northern forests, which would be known as the Mottahr wilderness, and to them the Mottahr. There they hid in obscurity, raiding and pillaging the Duaidar as both a means of survival, and as punishment for the empire’s hubris and “blasphemy against the universe.”

Today, because the Mottahr worship the old ways of the Mountain Gods, they practice savage and strange traditions. These are a holdovers from pre-Tanueran conquest; dark things such as human sacrifice and sacramental cannibalism.

You can read further about the world rent in twain in my next post on the Hachuswaylo River!