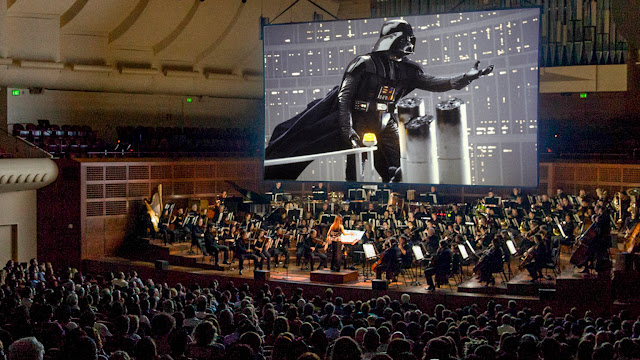 Like most GMs whenever I run a game, I like to have appropriate music or sounds effects playing in the background. The right music can really set the tone for a scene within game like dungeon crawling, celebrating at a tavern, or an epic battle with the big-bad evil guy (or gal). I fondly remember listening to Metallica or Led Zeppelin on a cassette player while my friends and I played RIFTS during our many sleepovers in the mid-80s.

I listen to a huge variety of music; from classical to metal to rap you can find it in my Spotify library. Whenever I’m watching a movie, I try to pay close attention to the score or soundtrack. To me it’s just as important as the actors, the script, and the production values. Aliens, Blade Runner, and Dune are soundtracks that are just as good as the movie.

When I run games online, I tend to use Roll20 for the VTT (virtual table-top) and Discord for voice and video chat. A cool feature about Discord is the ability to play music for others to hear if you’re in the same chat room. You can also play music through Roll20 using their pre-programmed music selections (which are pretty good).

As I mentioned earlier there are soundtracks that I absolutely adore, but there’s plenty of music to choose from if you’re looking for gaming appropriate sound tracks. I list a few that I use for my games:

http://audiomachine.com/ They produce music for movies and commercials. Listen to a few and you’ll recognize them almost instantly. This is my absolute go-to for anything I need for my games. Give them a listen you won’t be disappointed.

https://tabletopaudio.com/ Music made specifically for role-playing games. I’ve used it a few times and it’s worth checking out.

https://syrinscape.com/ Another site that produces music specifically for role-playing games. Syrinscape has a lot of fans and for good reason. They’ve been around for some time now and have an excellent selection of ambient music.

Finally, https://www.youtube.com/! You can find just about any soundtrack for your games, and if you are a paid subscriber you forgo the numerous commercials. Still, it’s a great resource what especially if you don’t know exactly what you’re looking for.

That’s it for now! Feel free to leave a comment about your favorite soundtrack or resource you use for your games. Stay classy and thanks for stopping by!